The big battle in grand prix motor racing in the late 1930s was between Auto Union and Mercedes. The latter were the first racing team to have dedicated car transporters, complete with workshops, tools and spares. A place for everything, including the race cars.

After a bit of unpleasantness between some countries, Mercedes returned in the early 1950s with the fabulous W196 series of racing cars. These included open and closed cars, open and closed wheels. Even then Merc were aware of the importance of exposure so came up with a wild and wonderful dedicated car, based, remarkably, on the W196 cars it was there to convey. With complex nouns, catchy titles evade the German language, so we had to make do with Rennabteilung or, when feeling a little frivolous, Rennwagen. 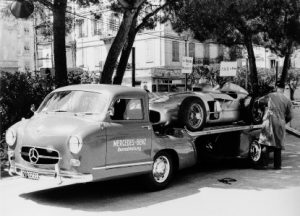 Although based on the chassis of the 300SLR it often carried, it can be appreciated that major modifications were required. The engine though was straight out of the racing car: a straight 6, fuel-injected 300SLR, although the power was reduced slightly, from 215bhp to 195, laughable nowadays I suppose, but then it gave a top speed of 170kph, but only to the brave.

It was mounted over the front axle, so making it virtually mid-engined, so gave the same handling whether loaded or not, but there are no reports of what it was like to drive at its top speed.

The interior came straight from the then current 180 saloon. 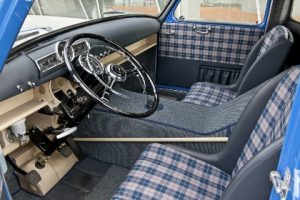 Photograph of the recreation

Its looks were, at the time, futuristic and it created a stir wherever it went. After the tragic events at Le Mans in 1955, with the deaths of circa 100 spectators, Mercedes pulled out of motor racing for some years and the transporter was relegated to being used for demonstration purposes, it pulling crowds wherever it was seen, first in the USA and then Europe.

In 1993 there was a change of heart and the Mercedes-Benz engineers decided to recreate the Rennwagen as faithfully as possible, using old drawings and contemporary photographs. Seven years later, ironically longer than their immediate post war racing campaign lasted, they came up with this:

When asked why the company had made such an investment for a car that spends most of its time in a museum, one of the crew presenting the vehicles at Goodwood, who wished to remain nameless, answered: “For fun.”

This site uses Akismet to reduce spam. Learn how your comment data is processed.

There’s a special TVR and RV8 page page, It gives details of all the books and videos on the TVR and RV8 from Writewheel.UK. There’s even a free book, and another at just £0.99.

This site uses Google Analytics. Please see the Terms page for what this means.